You may remember the Jounou family: mother Hanifa (age 65), her sister, Aisha (57), Hanifa’s two daughters, Radi (35) and Bana (28), and her two sons, Hamid (33) and Yussef (27). (Hanifa’s husband died in 2009.) In 2013, the family fled war-torn Syria and spent six years in a refugee camp in Lebanon, where they devoted their time to helping settle other refugee families, before moving to the United States in 2019.

We first shared their story not long after they arrived in Lafayette to live with their sponsor, Kathy, who met the family on a mission trip to Lebanon in 2016. Here’s a brief recap and update on the progress they’ve made in just three short years.

The Jounous were referred to Sister Carmen because we have an Advocate, Zoya, who is fluent in Arabic. She was able to connect with the family not only through language, but also on a community and cultural level. She helped them find an Arabic-speaking church in Aurora and also enrolled them in English classes. Within weeks of being in the United States, the four adult children had all secured Green Cards and found jobs: one at King Soopers, one at The Home Depot, one in housekeeping, and one in a restaurant.

Bana recalls meeting Zoya for the first time at Sister Carmen Community Center, “We immediately felt at peace after being interviewed by Zoya in our own language. We knew we could trust her. She has been a blessing to our family ever since.” 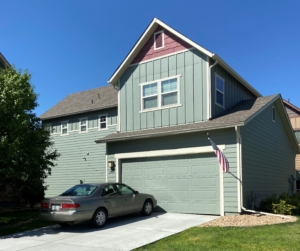 In the beginning, Zoya assisted the family by serving as their interpreter while tackling the tasks of being a newcomer—like opening a bank account, applying for a job, and getting a learner’s permit to drive. When generous donors wanted to give a used minivan to a Sister Carmen family in need, she knew just the one to recommend. The hardworking Jounous are more independent these days, but Zoya remains a trusted resource. About a year ago, they saved enough money for a down payment and bought a house in Erie. They sought Zoya’s approval prior to making the purchase.

She has truly become a part of their extended family, and their family is growing! This past March, Bana married an American she met while working at King Soopers. Zoya was at the wedding of course, beaming like a proud Auntie. Hamid also married in November of 2021 in Iraq. He filed the paperwork to bring his wife to the United States eight months ago and checks his application status online every day, hoping for progress.

When asked why they wanted to share their story, Hamid gave two main reasons: “We want to encourage other refugees, let them know that America is still a land of opportunity, that people are nice and welcoming. And we want to make a good example of what refugees can be: hard-working, learning English, and striving for a better life here.” 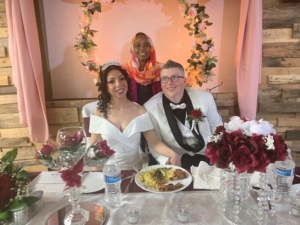 Hanifa’s four children all hope to become U.S. citizens one day. For now, they are focused on improving their English. They look forward to studying business and perhaps starting businesses of their own—Yussef as a photographer, and Bana and Radi as restaurant owners.

Three years ago, feeling desperate and alone as a refugee in a new country, Bana often found herself asking God, “Why did you send me here?”

She doesn’t ask God “Why?” anymore. Her family is safe and content, building a new life in America. “It’s Mashallah.”

Thanks for A Great Garden Season!