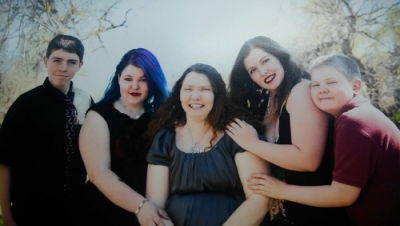 My name is Cynthia.

I had lived a good life. I was married with four beautiful children. I worked full time, had a house, a van, and was living what many people perceived as the American dream. In 2008 all of that changed—my marriage was breaking up and I had two very ill children that needed constant attention. In August that year, I lost our house and we were homeless.

This set off a whirlwind of staying on friend’s couches, shelters and even sleeping in our van just to keep my children safe. Unfortunately this lasted for years and because of the instability I lost several jobs during this time. Watching my children go through so much had negative side effects as well.

We as a family lost hope. Hope we so desperately needed but could not find.

In June of 2011 we moved into a pay by the week hotel in Lafayette. Once again fate had a cruel twist—I was becoming increasingly ill and required several surgeries. As a family we really needed this home—even if it was not permanent. I didn’t think my children could endure any more than what they already had.

I was lost. I felt there was no hope. My mind was going to dark places where I wasn’t so sure my children wouldn’t be better with a stable family and me leaving them.

The manager of the hotel mentioned Sister Carmen Community Center to me and offered to take me there to get some food.

I was expecting to reach out for help and made to feel insignificant yet again. To ask for food and be given food that was already rotting or that I wouldn’t be able to turn into a meal because I wasn’t a professional chef. I was expecting some non-cooked beans and spaghetti noodles.

I was expecting to break down, beg, and cry in front of so many people—instead I met Andrea and she met with me in a private room. The crying was very private and her compassion was immeasurable.
During that time Andrea made extra time for me. She didn’t push me out the door. Suddenly I was getting help.

It’s amazing how something so simple turned into something that saved our lives.

I was given food. Real food. Food the children would eat and food I could actually make. Then she told me Sister Carmen Community Center would cover the expenses at the pay by week hotel for one month while I recovered from the surgeries.

I left there that day and wept.

These tears were no longer of sorrow but suddenly of hope. I saw a future for the first time since I don’t know when. I went to the hotel and saw a bright light in my families’ future that I didn’t think existed anymore.

Everyone at the Center helped me so much in just a matter of months. I received counseling for help with PTSD; workshops to help me further my parenting and job skills; food to keep us fed, and clothing for school and work so everyone felt normal again. In January 2012 they helped me move into permanent housing and by June they had started me on a path to a career that would be stable. Through this entire process everyone at the Center was there for me, and supporting me and my children.

It has been 5 years since then.

My children and I have some side effects from that dark time. But we all know that we are not alone. If we need help we have only to ask these kind people. Our lives were touched by the kind people of Sister Carmen and our future became so much brighter. I would like to say everything worked out fine but this isn’t a fairy tale and life throws curve balls. But, we do now have a hope that we lost and a strength from the supportive services we received.

As a family we are able to better face now whatever comes our way.

Thank you Sister Carmen’s for the continued support and for never turning us away when we needed you. We have truly been blessed by the services and support you gave us.

Want to help families like Cynthia’s? Check out our volunteer opportunities or other ways to give.

Living on the Edge in Louisville, CO